TL/DR: In this post we'll examine C&C Generals replay (.rep) files in detail, figure out how they work, and then look at a very early implementation of a replay viewer that I've added to OpenSAGE.

Have you ever saved a replay from [insert your favourite video game here], and wondered exactly what the replay file contains? I don't know how many people will answer "yes" to that question, but I'm one of them. For efficiency and IP-protection reasons, replay files are usually stored in a binary format, so if you open one of them in Notepad, all you'll see are a bunch of garbled characters. It's often a long road from there, to fully understanding and being able to parse one of these files.

One of the features I hope to support in OpenSAGE is being able to use replay files from the original Command & Conquer: Generals and Zero Hour games. Since no official description of Generals' replay file format has been published, I have to do it the hard way, and figure out the file format... but fortunately, I'm not the first to want to do this.

I should note here that replay files vary wildly between games, so what applies to one specific RTS game won't apply directly to other games, but the general principles should be similar, at least across RTS games.

Before we get into the details, let's start with the fun part: creating a replay file in the first place.

Let's load C&C Generals, and play a quick skirmish game. For the purposes of this blog post, I want to keep the replay file really simple, so all I'll do is start a single-player skirmish game, build one building, and exit. Here's what that looks like:

Here's the replay file that Generals saved for that game:

If we open that replay file in VSCode using the excellent hexdump extension, we'll see this: 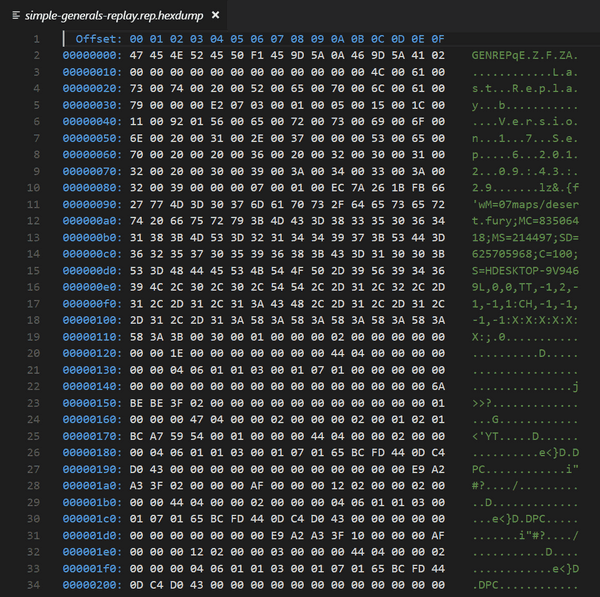 You can immediately see some human-readable text there. That's always nice to see, when you're parsing an unknown binary format.

It was at this point, when I first looked at Generals' replay files, that I wondered whether anybody else had figured out the file format before. So I Googled and found the cnc-replayreaders repo on GitHub, which contains at least some work on parsing replay files for many SAGE games, including, happily, C&C Generals. Without this information, proceeding further would have been much harder. Here's the C++ code for a prototype version of a Generals replay parser. There's even a document with the beginnings of a spec for these replay files. This is great stuff! Many thanks to louisdx, who I believe also goes by the name R Schneider on gamereplays.org. I'll duplicate the Generals part of it here:

Remarks. The two timestamps appear to indicate the real-world start and end time of the game. The header is of the same format as the later games.

The replay body consists of a sequence of chunks. Each chunk is of the following form:

In the simplest case, number_of_commands is zero and signature and arguments are empty. Otherwise, there are number_of_commands many pairs of bytes {cmd,nargs}, where cmd refers to one of about ten commands and nargs is the number of arguments. The size of an argument depends on the command type. Finally, arguments consists of all the arguments of all the commands, simply one after the other. The meaning of the chunk codes is unknown in general. Only a handful of values seem to occur, all in the range 0x300 - 0x500, and 0x1B, 0x1D. Many codes only ever seem to appear with a fixed, specific signature of commands. These are the known commands and their argument sizes.

There is no footer. The final chunk has `number_of_commands` set to zero, and it appears to have command code 0x1B or 0x1D.

Armed with that information, let's get started with parsing the header. I'll use C# here, because that's what we're using in the OpenSAGE project, but really any language that gives you the ability to read from a byte stream will work.

Before we can parse anything, we need to open a BinaryReader for the replay file:

Now we can parse the header, based on the description above. I've commented most lines with the actual values from our sample replay file.

So, the header spec in the cnc-replayreaders project looks pretty accurate. I've worked out that one of the unknowns is the game speed. I don't know about the others, but by comparing enough replays with known game states, it should be possible to work them out.

This already gives us quite a lot of interesting data, such as the map, player details, start and end times, and even the date that the version of Generals that I'm using was compiled (September 6th 2012, apparently).

This is all very well, but what I'm really interested in is the actual replay data.

There are many ways game replay data can be saved. If there aren't too many "things" in the world to keep track of, you could store the entire state of the world at every timestep. For RTS games with potentially hundreds or thousands of units, this wouldn't scale - and so these games usually only save player inputs, and use those inputs to recreate the entire simulation. (This is also why you often can't rewind replays; you'd have to start from the beginning again, and simulate every frame up to the one you're interested in, in order to get the correct state for that frame.)

Knowing that, what I'm expecting to see in the body of the replay file is a sequence of commands (or "orders", as I've chosen to call them), roughly corresponding to the actions I performed in the game. For example, "select unit" and "create power plant". Each of those orders would have arguments relevant to the order type. For example, "select unit" would have some sort of identifier to store which unit was selected.

There may be (and in fact, are) some orders that weren't triggered by me, such as an "end game" order - anything that the game can't recreate by itself needs to be saved in the replay file.

Fortunately for us, the cnc-replayreaders spec appears to match this concept, so we're on the right track. It looks like a "chunk" is probably a single order, and every order has 0 or more arguments.

The body of a replay file is composed of n chunks. There's no way to know how many chunks there are from the header - after reading the header, you just have to keep reading chunks until you get to the end of the file. Like this:

Let's look at the basic structure of a chunk. Then we can impose that structure onto our sample replay file and see what we get.

Let's use the description quoted above, and convert it into the code to parse a chunk header:

We don't know what orderType means yet; we'll have to look at the chunks, once we've parsed them, and make some guesses. We'll do that below.

Our first order of business is working out how many bytes each argument value uses, because without knowing that, we don't know where the next chunk starts.

There's nothing in the chunk header that directly tells us how big the argument data array is. We need to derive it from the number and type of arguments. I worked out the argument types from looking at a few replay files in a hex viewer and making some educated guesses. This fills in the gaps in the table of commands that I quoted above. Here's what I've found so far, although I'm sure there are more:

Now we can write the code to parse order arguments. Note that, to keep things simple, I'm not doing anything with the parsed variables, but in the real code I do.

Let's try to figure out what each order type means:

And that's it, for this simple replay file. Only 6 unique order types. Obviously in a full game, there would be many more order types, but this blog post is long enough already.

As I mentioned at the beginning, my motivation for parsing Generals replay files is being to play them in OpenSAGE. So, I implemented just enough in OpenSAGE to be able to parse and "play" this simple replay file, and here is the result. It's obviously extremely unfinished, but hopefully you can see the connection with the original replay. You can also see our work on the main menu, replay menu, map rendering, etc...

The code for "playing" a replay iterates through the chunks, with the appropriate timing, and executes each chunk's order - for example, creating a building or setting the camera's position. There's a huge amount still to do. There are some mysteries that will have to be solved, such as the random number generator (RNG) used by Generals, so there are no guarantees that we'll really be able to do it - but if I worried too much about that, I wouldn't have started OpenSAGE in the first place. On the bright side, much of the code for running through a replay will carry over, as-is, to actually playing single-player and multi-player games.

Hopefully that gives a rough picture of how one goes about parsing a binary file format where you know roughly what it should contain, but you don't know the exact structure. Again, many thanks to louisdx for the cnc-replayreaders project. If I wasn't able to build on that existing knowledge, this would have been a lot more difficult.

Parsing of Generals .rep replay files is implemented in OpenSAGE here. If you're interested, you can browse the full code to see details I left out in this blog post.

If you're interested in what we're doing in OpenSAGE, join our Discord server and chat to us, we're quite friendly!