OpenSAGE is an open-source re-implementation of the SAGE game engine. SAGE was the game engine used in C&C Generals, C&C Generals Zero Hour, Battle for Middle-earth and its sequels, C&C 3 and its sequel, and Red Alert 3 and its sequel. I've been working on OpenSAGE for 6 months, and made some good progress, so I've started this series of blog posts to talk about what is happening in the project each week. You can also star or watch the OpenSAGE GitHub repo for a more real-time view of things.

Following on from last week's post, here is what's been happening this week in OpenSAGE. 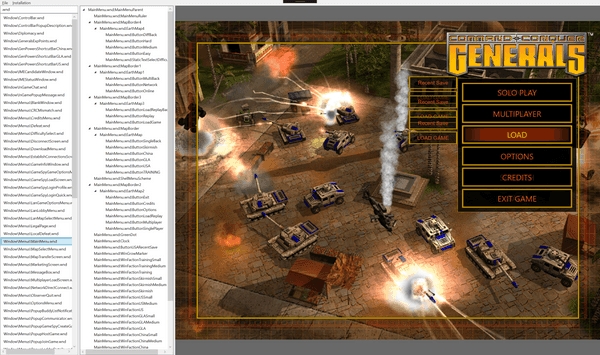 When I started working on OpenSAGE, I realised it would be good to have a way to preview the results of the file format parsers that I was working on. At that time I was working on a .map parser. .map files in Generals can contain both multi-player maps and single-player missions; they contain the terrain data as well as scripts needed for multi-player or single-player games. Since I didn't yet have an in-game UI, I built a simple WPF app with two panels: on the left, a list of files contained in the Generals folder, and on the right, a preview of the selected file. I built previewers for the main file formats as I figured out them out: .w3d, .map, .ini, etc.

Once OpenSAGE is far enough along in development that it's possible to start a game from the in-game UI, the data viewer will become less important, but still a helpful way to view individual files. For now, there is no "game" executable, so the data viewer is all there is.

This week I finished porting the data viewer from WPF to Eto.Forms, so that it can work on macOS and Linux. I haven't yet implemented rendering backends for either of those platforms, but at least I've removed one of the obstacles.

Here are screenshots with representative examples of all the file types that the OpenSAGE Data Viewer knows how to handle:

.w3d files were used in C&C Generals and subsequent SAGE games to store 3D models. C&C 3 and later games used an evolution of this format, called .w3x, which is kind of the same thing but XML-based. 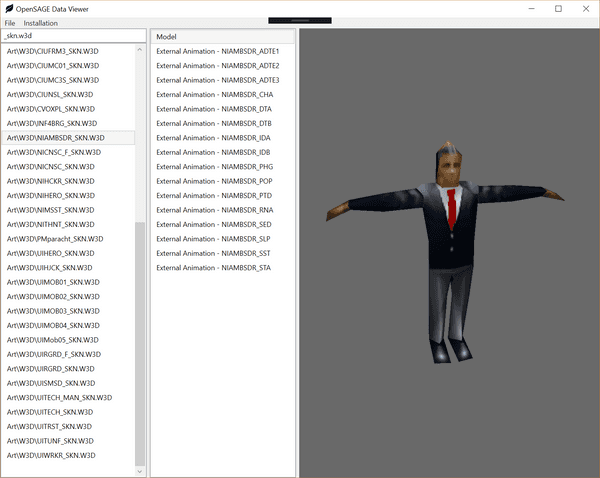 .map files store the single-player and multi-player missions, including terrain data and scripts. The .map viewer lets you change the time of day, which affects lighting. 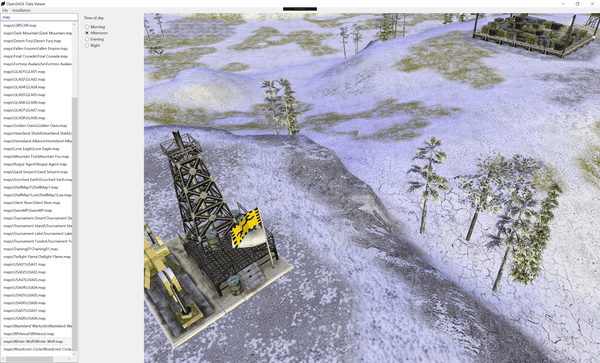 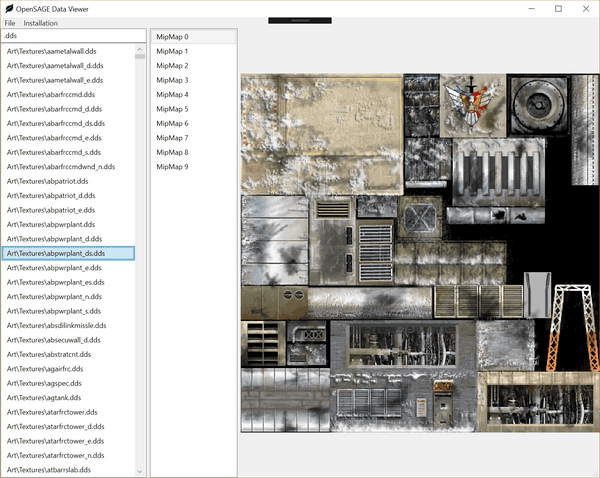 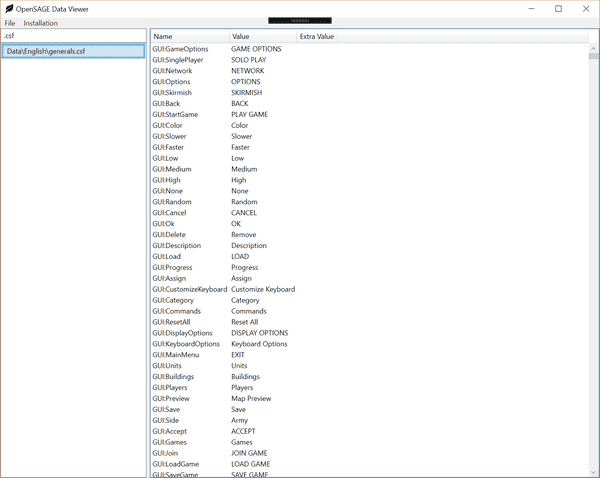 .const files store constant value definitions for use in the .apt UI framework. 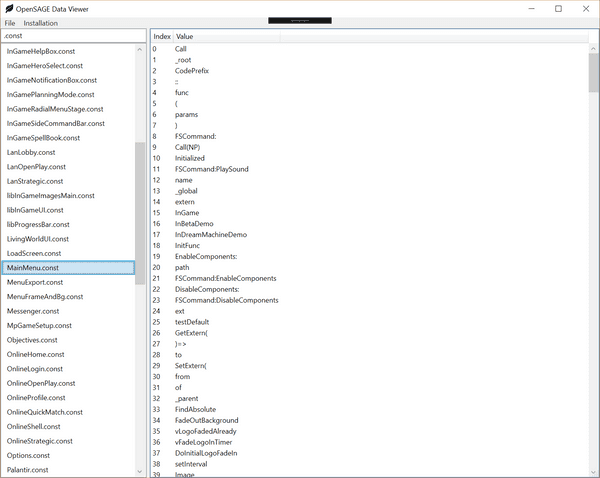 .ini files were used in Generals and subsequent SAGE games to store almost everything about the game, except for what was stored in other file types. My .ini viewer currently only displays object definitions and particle systems. 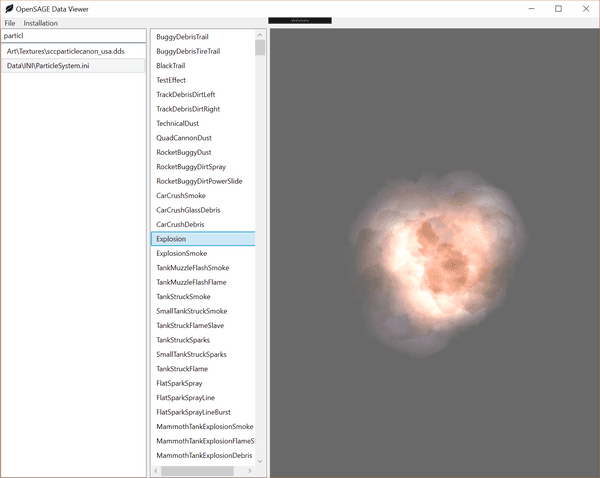 Last week I mentioned the .wnd format used for UI screens in C&C Generals. This week I've been working on rendering more parts of it, including text. Here's the current state of the main menu (defined in MainMenu.wnd):

Some UI elements are visible that should be hidden - I still need to look at why that's so. Buttons respond to mouse hover now, but they don't yet do anything when clicked. 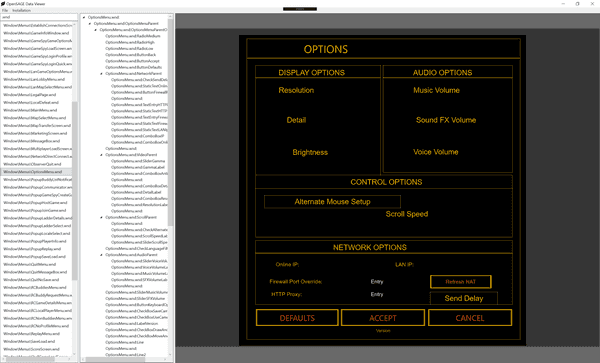 This is the Options menu. There's much more to do here. I need to implement textboxes, checkboxes, and comboboxes.

And here's one we all like to see - the victory screen. Yes, even that was defined in a .wnd file, not hardcoded. 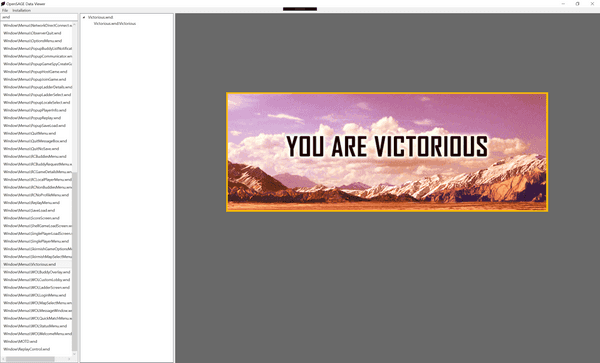 The .wnd viewer has the UI hierarchy in a tree view on the left - you can select a UI element and it will be highlighted on the right.

That's all for this week - see you next time!